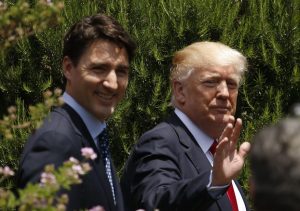 My advice to Canadian PM Trudeau:    The Facts is that  Canada exported $300.0 billion in 2017 to the U.S.A! Up 8.0% ($22.2B) from 2016, up 170% from 1993 (pre-NAFTA). Top exports are mineral fuels ($73 billion), vehicles ($56B) and machinery ($21B). Therefore, Loosing the US market will create a recession in Canada!  Why would PM Trudeau risk this Canadian trade advantage to insult the US? Trudeau chose according to Trump’s aid Kudlow (on CNN’s “State of the Union”) to make what he called “false statements” at a news conference  toward the end of the G7 meeting. Kudlow described the comment in which Trudeau publicly criticized Trump’s trade policy as “a betrayal.” Peter Navarro, Trump’s trade adviser said on “Fox News Sunday” that “There’s a special place in hell for any foreign leader that engages in bad faith diplomacy with President Trump and then tries to stab him in the back on the way out the door.”  As a result of Trudeau statements the US withdraw support and didn’t  endorse the joint statement of the G7 leaders after the sumit in Canada. . My advice to PM Trudeau is to put aside and irrelevant feelings he has toward President Trump in favor of a rational conduct and policy that will best serve the economic interests of Canada … and the U.S.