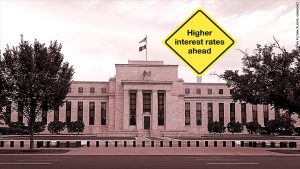 The Federal Reserve raised interest rates .25% and suggested that they are on on track to raise rates twice more in 2018. It is reported that the Fed “pursues a return to more “normal” interest rate levels.” I believe that the FED and Jerome H. Powell, the new Fed chairman are wrong! There is NOTHING “normal” in the new economy after the great recession that begun in 2008. Raising interest rates is an activity of old understanding of economics while ignoring the new reality!

The Fed’s forecast a stronger economic growth up to 2.7% this year! “The U.S. unemployment rate, now at a 17-year low of 4.1% is expected to keep falling to 3.8 percent at the end of this year and 3.6% at the end of 2019.” Inflation on the other hand is expected to be below 2% which is low!  There’s no risk of inflationary pressures. Usually, the Fed raises the short-term interest rates when it believes that there is inflationary pressure due to excess demand. That’s not the case.

So, what is the purpose of raising interest rates while the U.S is still struggling with its most significant challenge: wages stagnation! This has led t increases in inequality and poses a challenge to our democracy and the American dream! The U.S. economy has experienced long-term real wage stagnation and the fact is that the median worker in 2017 earned only slightly more than in 1979! Raising interest rates will hurt an entire section of the population that is struggling! The Fed are careless about that reality and only “care” to fight inflation which is a a 1970’s “war” they are fighting. Raising interest rates right now would be like cutting off a patient’s medicine at the very first sign of recovery.

Here is a reminder how today’s economy is not understood and managed by yesterdays economist!

You might remember that, in the days just before and right after Donald Trump’s surprise victory in the Presidential election, many economist predicted that it would be a harbinger of a global economic slowdown, if not even a collapse. Writing in the New York Times, Paul Krugman lamented that “we are very probably looking at a global recession, with no end in sight.” (http://www.nytimes.com/interactive/projects/cp/opinion/election-night-2016/paul-krugman-the-economic-fallout) Time magazine echoed (and reprinted) Krugman’s sentiments, citing Helge Pedersen, the Chief Economist of Nordea that “Trump’s anti-globalization stance and protectionist trade policies could result in a trade war that would trigger a recession.” (http://time.com/money/4563085/donald-trump-global-recession-fears/) So dire were the economic prospects of Trump Presidency that, as the incoming returns indicated that Hillary Clinton was likely to lose the election, the Dow Jones Futures Market plummeted 900 points and global markets went into a tailspin on November 9th 2017 (http://www.usatoday.com/story/money/markets/2016/11/08/markets-election-night/93499832/). These prognostications, in their turn, echoed an assessment published by Moody’s in June 2017 on the “Macroeconomic Consequences of Mr. Trump’s Economic Policies,” in which they posited three potential scenarios – one of which posited a mere economic slowdown and two that predicted outright medium-term economic recession (https://www.economy.com/mark-zandi/documents/2016-06-17-Trumps-Economic-Policies.pdf)

However, the fact is that none of that happened and in fact the opposite! THEY WERE WRONG!

And now, I believe that the FED interest rate increases continues that false narrative and send the world a wrong message, both about the viability of the U.S. economy, and the competency of those appointed to steward it. The United States, and the world, is entering a new and increasingly uncertain global order. Resorting to the antiquated monetary and fiscal policies of the past clearly makes no sense at this present moment. I argue that the challenge to all policymakers – whether on the left or right – is to dispense with old paradigms like interest rate hikes and consider the new challenges that the United States faces on the horizon. Now is the time to develop innovative economic frameworks to address unknown economic realities across the globe. There was no need to consume hours of “hot air” debates on the increase of  short-term interest rates. Once again, creating expectations impacts markets. The bigger challenge is to address wage stagnation. Interest rate increase is bad medicine!

« Israel admits it bombed Syrian ‘nuclear site’ in 2007! Why Now? Michael Harris PhD, Dean and Professor, CPS, TSU, Nashville TN
Who is Responsible for the Death of Master Sgt. Dunbar by an IED in Manbij, Syria? & And What is the Mission? »