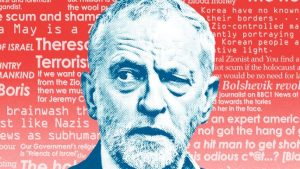 “The Sunday Times” for exposing: “the anti-Semitic Jeremy Corbyn’s hate factory.” The paper describes the “damaging new anti-antisemitism scandal as a bombshell dossier reveals the full extent of anti-Jewish, VIOLENT and ABUSIVE comments on Facebook groups mobilizing his most fervent supporters. Twelve senior staff working for the Labour leader and the shadow chancellor, John McDonnell, are members of groups containing anti-Semitic and violent comments, including praise for Adolf Hitler and threats to kill Theresa May, the prime minister.”

The bigger problem is NOT that the U.K. Labour leader is a Jew hater and a dangerous antis emetic grounded in Nazi style but rather that large segments of the British population (not all!) have always held these views and now more than ever are openly using social media (Ooops.. Face book again…. time to regulate…? ) to express their violently hate against Jews. The antisemitic Corbyn types  come and go….  The problem is is the legacy of enhanced antisemitism that lives on and threatens the well being of each of us! Is a Second Holocaust on the Horizon? To that I say: “Never Again.”

« Who is Responsible for the Death of Master Sgt. Dunbar by an IED in Manbij, Syria? & And What is the Mission?
Michael Harris PhD, Eastern Michigan University, EMU, Distinguished Teaching I Award, 1997 »