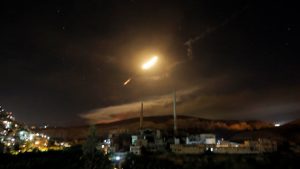 A very successful operation of the IDF in Syria against Iran forces! May 9th 2018 will be remembered as the night the Israeli Defense Forces struck approximately 50 Iranian targets after 20 rockets were fired towards Israel by the Iranian Quds Force, a unit of Iran’s Revolutionary Guards. The United States designated the Quds Force a supporter of terrorism!  Targets included logistics, headquarters, military compounds,  communication centers, rocket launchers, weapons storage sites, and intelligence systems.  According to the IDF, this was one of Israel’s largest operations in decades. “It will take Iran a long time to rehabilitate the infrastructure that was destroyed overnight.” ‬”During the operation Israeli jets were met with Syrian anti-aircraft fire and in return air defense batteries were destroyed.” The IDF prepared for this night for a long time. Intelligence was collected and dozen of targets were identified. The Iranian attack gave the IDF the opportunity it was ready for. The IDF marked a red line and sent a message of deterrent. Israel will not tolerate Iranian military in Syria.

I believe that Iran suffered heavy casualties and will rethink its strategic role in Syria.