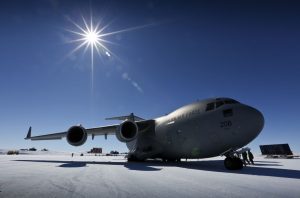 The Australian Government has announced its intention to construct the 1st  paved runway in Antarctica! Is this a good idea? What happens if other countries follow and soon we will see an international race to “pave Antarctica”? It seems that the beautiful continent is increasingly becoming an area of international power struggle and dispute!

The Australian government claims it is planned to “provide more reliable access to Antarctica throughout the year, improving our ability to conduct year-round, world-class scientific research and respond to emergencies.”

Currently in Antarctica about 30 stations are operated operated by 16 national governments. They are party to the Antarctic Treaty. Most have “landing facilities for either helicopters and/or fixed-wing aircraft; commercial enterprises operate two additional air facilities. Helicopter pads are available at 27 stations; runways at 15 locations are gravel, sea-ice, blue-ice, or compacted snow….