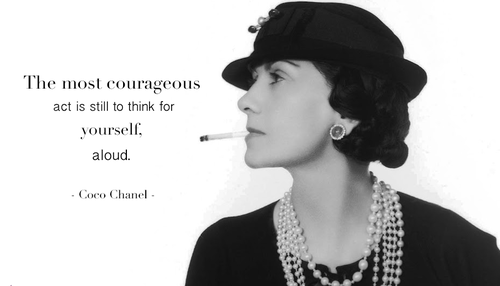 Recently, the Guardian posted an article about the Associated Press’ collusion with the Nazi regime in the 1930s. (http://www.theguardian.com/world/2016/mar/30/associated-press-cooperation-nazis-revealed-germany-harriet-scharnberg?CMP=share_btn_link) The AP supplied the Nazi Regime with images from their collections, hired reporters who worked for the Nazis’ propaganda division, and agreed to publish any material that would “weaken the strength of the Reich at home or abroad.” Unsavory as this is, the AP’s collusion is hardly the only instance of a major corporation collaborating with Hitler’s regime.

A comprehensive list of  the “11 Popular Brands Of Today That Worked With Hitler & The Nazi Party” has been published.

A lifelong interest and these latest revelations led me reading a spate of articles recently that have brought to the surface some of the less savory aspects of the fashion industry. A recent French documentary, for example, has claimed that the designer Coco Chanel was a Nazi spy (http://www.haaretz.com/jewish/news/1.630199) and has reminded the world that she actively collaborated with the Nazis, and had a German lover. A few years ago, the British actor, Russell Brand, was thrown out of a party sponsored by the fashion company, Hugo Boss, after he remarked on that company’s Nazi past  it made uniforms for the Nazi party (http://www.dailymail.co.uk/news/article-2413371/Shameful-truth-Hugo-Bosss-links-Nazis-revealed-As-Russell-Brand-thrown-party-accusing-fashion-designer-helping-Hitler.html). And L’Oréal, the huge cosmetics firm, has a sordid past itself, its founder having funded French fascists during the 1930s and supported the creation of racial laws during France’s wartime occupation (http://www.nytimes.com/2011/02/06/books/review/Weber-t.html?_r=0).

It’s amazing to me how most people have no clue about how many companies had such relationships with the Nazi regime. Naturally, people have some vague knowledge of Henry Ford’s antisemitism and, of course, IBM’s contributions to organizing the Holocaust have been well established (http://www.amazon.com/IBM-Holocaust-Strategic-Alliance-Corporation-Expanded/dp/0914153277/ref=sr_1_1?ie=UTF8&qid=1459002512&sr=8-1&keywords=IBM+Holocaust). Edwin Black, who wrote IBM and the Holocaust, has also assiduously researched other companies’ relations with the Nazis in a more recent volume, Nazi Nexus (http://www.amazon.com/Nazi-Nexus-Corporate-Connections-Holocaust/dp/0914153099/ref=sr_1_1_twi_pap_2?ie=UTF8&qid=1459002705&sr=8-1&keywords=Edwin+Black+Nazi+Nexus).

Now, whenever I bring up this past, inevitably I hear, “that was over seventy years ago!” It is true that many of these companies have accounted for their complicity in wartime atrocities and, in my view, boycotting them at this is a personal matter. But what is relevant to us as communities is that these corporate-Nazi collaboration should do is to make us sensitive and aware to the ways in the past is easily – too easily – effaced. Chanel’s sordid history of Nazi collaboration, which has been a matter of public record since the 1940s, is still largely unknown among the millions who buy her namesake company’s products. Ford, of course, still sells cars by the millions and, except for some specialized studies like Neil Baldwin’s Henry Ford and the Jews, the poisonous legacy of Henry Ford’s antisemitism is largely muted.

This has consequences not only for historical understanding but also in terms of holding contemporary companies and institutions accountable as well. A recent book edited by Sheri Rosenberg and Tibi Galis, Reconstructing Atrocity Prevention (2015), studies how modern corporations are complicit in human atrocities on a global scale. In an essay within that volume called “Corporate Behavior and Atrocity Prevention”, Owen Pell and Kelly Bonner cite, among many examples, the French oil giant Total and the U.S.-based Unocal who “faced allegations of forced labor by the then-Burmese government… and complicity in the attendant murder, rape, and torture of local residents by Burmese security forces.” (399) Or, take the case of the Canadian energy firm Talisman Energy who were accused of aiding and abetting the displacement of non-Muslim Sudanese peoples in order to placate Sudan’s Muslim-led government (397-8). As Pell and Bonner go on to argue, efforts to hold companies liable for their participation in human rights abuses are only haltingly successful at best and U.S. statutory law “do not provide reliable coverage with respect to corporate or corporate officer liability.” (406) Indeed, recent decisions by the U.S. Supreme Court, such as Kiobel vs. Royal Dutch Petroleum, in which twelve Nigerians sued the oil giant for its role in the government crackdowns of anti-oil protestors, “will make it even harder to bring corporate aiding and abetting human rights violations cases in the U.S. against non-U.S. entities or for non-U.S. conduct.” (409) Finally, the Wall Street Journal recently listed the names of companies and organizations that are doing business in Iran. (http://graphics.wsj.com/iran-sanctions/) While these relations are legal, in that they are structured in such a way as not to violate the sanctions put in place by both the UN and the US, it is unsettling to see so many top American businesses willing to do business with such a repressive, theocratic regime. The names include GE Health Care, Harvard University, Boeing, the Universities of Wisconsin and California at San Diego, as well as large European concerns like Bausch and Lomb, BNP Paribas, and HSBC Holdings. Indeed, it seems as though we are going backward rather than forward…

Here is where a broader understanding of history can, and should, inform public policy debate and government action. Companies will accept participating or abetting in human rights violations if they believe that the potential profits outweigh any future negative consequences to profit or brand image. Coco Chanel was never thoroughly investigated in the post-war era and, after spending a few years in discreet exile in Switzerland, returned to France to run her company, accumulating a net worth of $20 billion when she died in 1971. Ford experienced a public backlash and civil lawsuit against his anti-Semitic newspaper, The Dearborn Independent, but, again, his company’s, and his personal, fortunes, were not affected neither because of his actions nor his warm relations with Nazi officials. In other words, had these corporations and individuals held to account, or known that they would be so, for their collusion, perhaps it would have served as a deterrent.

Holding corporations and those who lead them accountable for their participation in human rights atrocities should be one of the major lessons of the Second World War. Yet, a general lack of historical understanding means that, by and large, most people are unaware of the abuses that occur in order to provide them with cheap gas or electronic goods (the slave-like conditions in the FoxComm plants in China, where most Apple products are made, is a good example of the latter).

Time we learned that we must use these shady experiences to insist that such conduct must not be repeated. It is my conclusion and assertion that for decades we accept organizations that conduct themselves in an immoral, evil, unprincipled, unscrupulous dishonorable manner.  Why? Since we as consumer are of no match to the power of branding which is a perception. The past 70 years teach us that perceptions of a brand (almost) never changes if you personally are not impacted by its misconduct. We have NOT learned to respond when a strong brand conduct themselves in an inappropriate manner. Rather, they fight hard to protect the brand and we continue to buy. This explains why we buy Chanel at a tune of $5 Billion a year and going strong.

Sadly, the most important lesson reinforces Edmund Burke’s assertion that “The only thing necessary for the triumph of evil is that good men do nothing.” It’s time to take actions against corporations and individuals who collaborate with enemy and violate human rights!