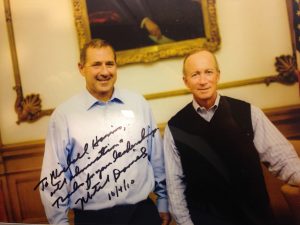 “Indiana University Kokomo is a much different place than it was a year ago. In fact, it is well on its way to becoming one of the most important and exciting locations on the city’s map. And it is due to the vision of Chancellor Michael Harris.

Harris has been in the job for a little more than a year, having been sworn into service in October 2010. He wasted little time in making his presence felt academically, athletically and as a member of the larger community. It’s difficult to know where to start in listing his accomplishments.

Let’s look at the academic changes Harris has instituted this year. He established a million-dollar nursing simulation center at the campus with the assistance of St. Joseph Hospital. This learning facility allows students to experience healthcare scenarios in an environment that closely mimics a hospital setting. It is an amazing addition to a nursing program that already was renowned for its quality.

Harris also led the university through the process to add 10 new degree programs to the Kokomo campus. Students now can earn Bachelor of Science degrees in biochemistry and health sciences. In addition, Bachelor of Science programs were added in biological and physical sciences, chemistry, biology, psychology, mathematics, sociology, new media and communication.

To help enhance the university’s image as a full-service educational campus, Harris also instituted online classes and increased the number of Friday classes offered. And he brokered an agreement with Ivy Tech Community College to accept a full range of “core” educational class credits from the college for those students pursuing a four-year degree by first attending Ivy Tech’s two-year programs.

Increasing educational opportunities was just one part of Harris’ reshaping of IU Kokomo’s academic face. He also fortified an exchange program with Sungshin University of South Korea, encouraging students and faculty from both universities to experience education in a new environment.

And, in what may be one of the most innovative mechanisms to make education more accessible to everyone, Harris oversaw the development of the Student Success tuition discount program. For those students who maintain a 30-hour class load each year and continuous enrollment over four years, along with academic progress, the university will discount tuition by an increasing percentage each year — in effect discounting a full year of education to the participants. This program garnered national recognition from the Lumina Foundation earlier this fall.

No university is complete without an athletics program, however, and Harris aggressively pursued its development. In less than a year, IU Kokomo had its first women’s volleyball program and relaunched its men’s basketball program after a hiatus of nearly 20 years. These first two sports may lead the university to a full offering a athletic program with the intent of join the National Association of Intercollegiate Athletics (NAIA).

These changes had an immediate and remarkable impact on enrollment. This fall marked the largest number of students in the school’s history — 3,318 enrollees — which was driven by a very robust freshman class.

Harris also made his mark outside of the IU Kokomo campus. Over the summer, he was named to the Indiana Automotive Council by Gov. Mitch Daniels, and earlier this month he traveled to Washington D.C. to speak on the importance of regionalism in economic development — a presentation he has given at the state and local levels as well. His approach is called the “triple helix,” incorporating industry, government and education in an effort to create regional hubs of innovation that can have a positive impact on economic development across communities.

If this is what Harris was able to accomplish in just one year, imagine what 2012 will bring!”

Chancellor Michael Harris is named “2011 Person of the Year”