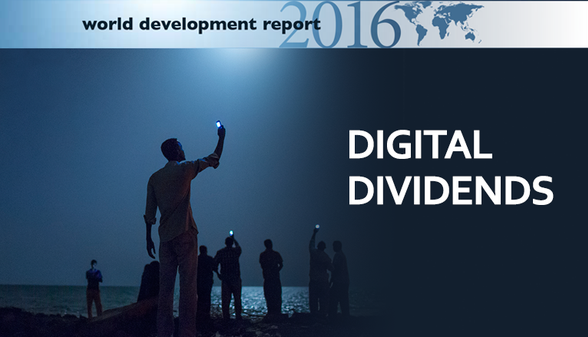 The World Bank just came out with a report that has completely absorbed my attention over the past several days (find it here: http://www-wds.worldbank.org/external/default/WDSContentServer/WDSP/IB/2016/01/13/090224b08405ea05/2_0/Rendered/PDF/World0developm0000digital0dividends.pdf). Titled Digital Dividends, it argues the necessity for expanding internet connectivity and other advanced technologies to as many people in the developing world as possible. “By overcoming information barriers, augmenting factors, and transforming products,” it reads, “digital technologies can make development more inclusive, efficient and innovative.” (p. 9) Specifically, the report argues that the internet and digital technologies promote four major qualities: development, inclusion, efficiency, and innovation.  By lowering transaction costs, these technologies make it possible for developing countries to participate in the global economy, to spread wealth along a greater geographic area, to make markets more efficient by connecting buyers and sellers, and to allow for the emergence of even better products and more capacious technologies down the road.

The report, indeed, appears on the surface to offer a quite rosy view of the world into which technologies lead us. Quickly, though, it presents another side – technologies are also creating greater control, inequality, and concentration: Control because corporations and governments that aren’t held accountable for what uses to which they put these technologies tend to maximize their power; inequality because digital technologies are leading to a greater divide between skilled and unskilled workers; and concentration because technologies can allow key players in the marketplace to inhibit competition. In certain respects, the report echoes concerns voiced by Nicholas Carr, whose recent book, The Glass Cage, describes in worrying detail the way that computers and automation are rendering increasing numbers of workers irrelevant in the global marketplace while concentrating the power and influence of a very few key players in specific market sectors.

So, which is it? Are technologies leading us to a promised land or a waste land? This week, the leaders of the major world economies are holding their annual meeting at Davos where the theme this year is called the Fourth Industrial Revolution that they characterize as the rise of robot and nanotechnologies. The Forum has just released its own report (http://www3.weforum.org/docs/Media/WEF_Future_of_Jobs_embargoed.pdf) claiming that such technologies will be drivers of change and require proactive interventions by governments and industries to deal with the expected disruptions – including the creation of two million jobs, and the loss of seven million largely in health care, financial services, and energy. (For a summary, see: http://www.ibtimes.com/davos-2016-need-embrace-robot-revolution-not-fear-it-tech-leaders-say-2272199).

We should not underestimate the potential transformative and devastating impacts that these technologies can produce. Just think back for a moment that even fifteen years ago, before the era of digital streaming, bookstores, record stores, and video rental stores covered the landscape. Yet, I agree with those at Davos who say that our best response to emerging technology is to embrace it because, in truth, it is difficult to predict the longer-term outcomes. This can only be done, however, through effective and far-sighted leadership.

Indeed, the commingling of leadership qualities and emerging technologies may be one of the most important challenges that leaders have to face. How can we draft policies, or adopt new technologies, when we can’t even predict outcomes? How can we ask people to incorporate into their lives and work habits machines that, in the end, may replace them? This is where my idea of leadership crevasse peril comes in: effective leaders have to work in multiple registers and with often contradictory goals. They have to do what they have to to ensure the survival and success of their organizations while also assuring their staffs that they understand and empathize with them. New technologies make this a considerable challenge. Yet, I believe it can be done.

How? Make the learning and adopting of new technologies a joint learning experience between leader and staff. As the staff member builds new skills, she or he will acquire the ability to transition into new employment sectors that will need them. Moreover, this way you don’t just become your staff’s leader, you also become their advocate. People fear technology – just like the Luddites did two hundred years ago – because they fear being rendered obsolete. As their technological advocate, you not only acquire the technological skills necessary to keep your enterprise successful in a changing world environment, but also show them that they can aspire to even grander goals as they become more technically proficient employees.

Indeed, merging technological integration with employee development is a sure-fire way to maximize your dividends. Everyone benefits from having a better skilled and more sophisticated workforce. But only true leaders who stay informed on technological development and possess the foresight to see their application, can hope to accomplish this.