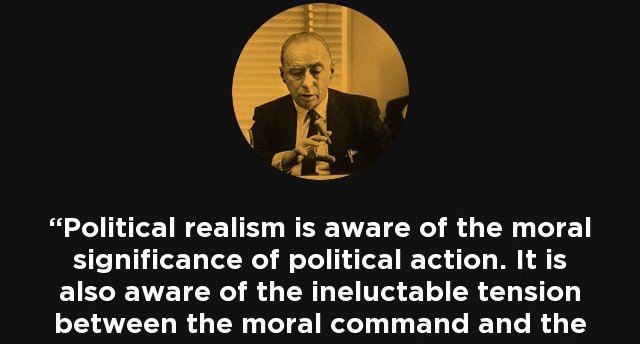 In Riyadh, Saudi Arabia on May 21, 2017, the President stated that the US will be guided by “Principled Realism!” This is a fundamental change in US Policy and is grounded in the work of Hans Morgenthau who after WW II was one of the leading American International Relations Scholars. He developed the political theory of “Political Realism” which at least at this point seems to be the foundation for Trump’s “principled realism.”

Morgenthau theory seems to be adapted to a large degree by the President. A closer look will allow us a better understanding as to the US Policy in years to come! Yes, the president does say many odd, peculiar and uncanny things. But I believe based on the speeches I hear and read that he has a serious foreign policy foundation that is being revealed on this visit. I do not think that Trump has so far been able to articulate it to the American people.

Trump’s “Principled Realism” is based on Morgenthau “Six Principles of Political Realism. The principles, paraphrased and shortened are:

“1. Political realism believes that politics, like society in general, is governed by objective laws that have their roots in human nature.

2. The main signpost of political realism is the concept of interest defined in terms of power… . A good foreign policy minimizes risks and maximizes benefits.

3. Realism recognizes that the determining kind of interest varies depending on the political and cultural context of the foreign policy,

5. Political realism refuses to identify the moral aspirations of a particular nation with the moral laws that govern the universe.

6. The political realist maintains the autonomy of the political sphere; the statesman asks “How does this policy affect the power and interests of the nation?”

Those 6 principles, I believe are at the core of Trump statement in Riyadh, Saudi Arabia on May 21, 2017: “We will make decisions based on real-world outcomes – not inflexible ideology. We will be guided by the lessons of experience, not the confines of rigid thinking. And, wherever possible, we will seek gradual reforms – not sudden intervention. ”