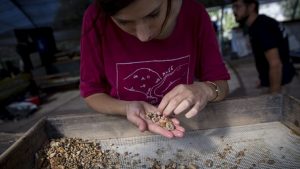 Five exceptionally rare Jewish coins discovered by Temple Mount, Jerusalem, Israel.   The coins were minted by autonomous Jewish province in late 4th century BC! Attested to existence of commercial, administrative life in and around Second Temple. Jerusalem the eternal capital of the Jewish people in Israel. “If I forget thee, Jerusalem/Then let my right be forgotten.” “אִם-אֶשְׁכָּחֵךְ יְרוּשָׁלִָם– תִּשְׁכַּח יְמִינִי”  Psalm 137:5, ה 137,, תְּהִלִּים

« Is The “Trade War” Between The U.S. and China Over? I Doubt! Michael Harris PhD, Dean and Professor
Australia to Construct the 1st Paved Runway in Antarctica! Is This a Good Idea? »