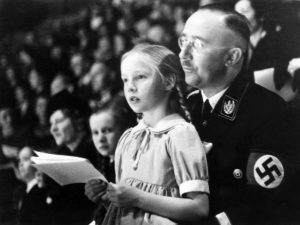 A true news finding shocked me! I have a simple question – Has Germany changed after World War II when Nazi Germany engaged in a systematic targeted genocide “Shoah”, “The Holocaust” in which “Nazi Germany, aided by collaborators murdered app. Six million Jews, two-thirds of the Jewish population of Europe, including over a million children!”? Facts: Heinrich Himmler was the commander of the SS and principal architect of the of the Holocaust. Yet we now find out that after WW II the German spy agency BND employed his daughter Gudrun despite the fact that she NEVER renounced her father, his crimes, or Nazism!  גרמניה אז והיום כלום לא השתנה! Germany’s intelligence services have come under criticism for not rooting out right-wing extremists in the post-war era. Critical historians say ex-Nazis and far right sympathizers working inside the security agencies of then-West Germany may have protected others.” Surprise? No! So has Germany changed? I visited many times and I doubt…! Riding a train in Germany gives me the chills…..and a sense of exulansis! But sadly as a Jew living in the U.S., I also know and experienced AntiSemitism in the USA! Can it happen again?  “Never forget that everything Hitler did in Germany was legal.” Martin Luther King, Jr.              (Reuters|Ynet  06.29.18)