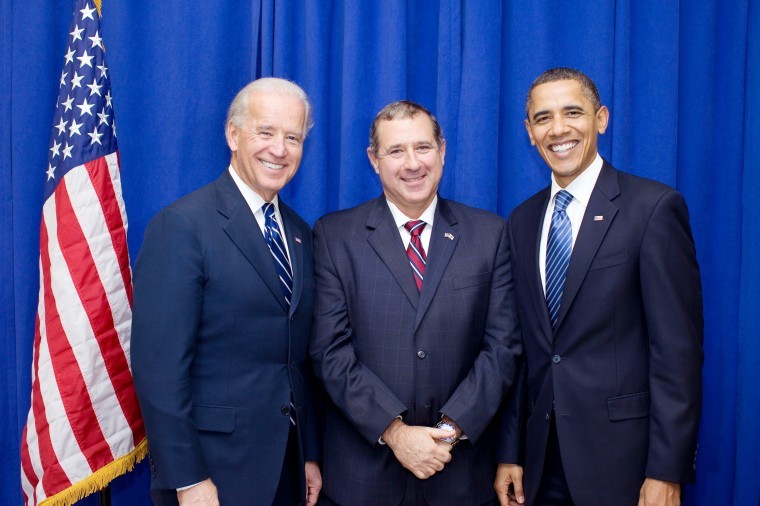 WELCOME CHANGE — For his installation ceremony, Indiana University Kokomo’s new chancellor Michael Harris (shown in the middle above with Vice President Joe Biden and President Barack Obama when they came to town in November) chose to focus on building coalitions for a regional transformation across north central Indiana over the traditional pomp and circumstance. Perspective ­photo / Provided Pete Souza

With political unrest spreading across the Middle East, the only thing certain is that things will not be the same.

To help provide some insight into the situation, the Kokomo Perspective sat down with Michael Harris, chancellor at Indiana University Kokomo, professor of Public Policy, and a former major in intelligence with the Israeli Defense Forces.

Harris discussed what’s behind the situation, and what America’s role should be.

Harris: I don’t think the unrest has really been analyzed accurately and appropriately. I believe that the root causes of the unrest are economic conditions. Three fundamental problems that all of those regimes share are:

2. Poverty and the lack of meaningful jobs and career opportunities for those who go to college.

3. A serious wealth distribution between those that have and those that don’t have.

Combine those factors with a reality in which those countries are ruled in a non-democratic and oppressive manner and it is a clear prescription for dissatisfaction and civil unrest. The deep surprise and sense of amazement at the unrest that has spread and why intelligence agencies were caught surprise are mysteries to me.

Unemployment, lack of economic opportunities, increases in the cost of living and a very serious wealth distribution are deep sources for discontent. To that you add non-democratic regimes that rule through force like Hosni Mubarak who has been in power over 30 years, and Qaddafi who has been in power for over 40 years. That leads to unrest, destabilization and calls to challenge the status quo.

Therefore, I conclude that at the heart of the unrest are serious economic problems and challenges. I said it about Egypt a long time ago, and it is pretty much all across the Middle East. All the way from Bahrain to Tunisia, it is very similar. We have people facing serious economic problems and a single ruler who controls all resources and revenues in countries like Yemen, Bahrain, Tunis, Egypt, Lybia. They all have a single ruler who has ruled for so many years. To that you add several elements which are unique to each of those countries and you have a wide unrest with many similarities. In Bahrain, you have a situation where you have a minority of Sunnis who are ruling a majority of Shiites. In Egypt, part of the unrest has been the Muslim Brotherhood, which has been active since the 1920s, etc. Each of those countries has its own unique groups that certainly want to change the status quo for different reasons and gain control for the future. That is the main challenge and danger. Who will end up in the ruling position? Will democracy prevail? Will extreme fundamental elements gain control? One of the most important challenges in all of those countries is the lack of a middle class that would sustain a stable regime. You can’t have anywhere in the world a stable democratic system of governance if you don’t have a middle class.

KP: Creating “the other” has always been a huge catalyst for political change. That socio-economic unrest has also been used by some radical groups to target the United States. They need to direct that unrest somewhere, and now it no longer seems to be working.

MH: That is very true, and it is a pattern that we see over and again. In Libya, Qaddafi is trying to use similar language as did Mubarak. He is blaming outside agents in influencing the unrest and is trying to argue that they are doing so in order to hurt the country. Qaddafi, of course, is using extreme strange arguments in addition to his use of vicious force by his own army and hired hit men against his own people.

The fact of the matter is that those rulers know that the easiest thing to unite people is to try to find some perceived, common, outside danger that everyone needs to unite against; if they don’t unite, they warn that something bad will happen. The problem for them is that, that no longer works. The people in those countries no longer believe those arguments.

The alarming fact is that even when the economies in those countries were growing and revenues were increasing, the wealth was been accumulated by very few. The Egyptian economy has been growing for the past few years. Egypt was even recognized by the International Monetary Fund and the World Bank for economic growth. The trouble is that there is a strong assumption that when there is economic growth that it is distributed. Egypt is a great example where despite economic growth very few enjoyed all the wealth that economic growth brought about to the country. Libya is also a good example. It supplies 2 percent of the world’s oil. The regime accumulated billions while people were living in terrible poverty. The same can be said for Bahrain.

KP: There has been a lot of fear-mongering labeling this movement as religious and saying they are trying to overthrow Egypt’s “democracy.” Can you discuss why Egypt is simply a “democracy” on paper.