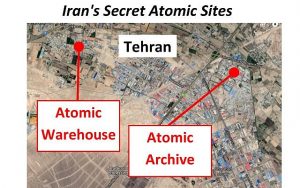 Israel PM Benjamin Netanyahu gave an exceptional speech at the United Nations on Sep. 27, 2018! He revealed “another secret atomic facility” in Iran! Only 4 months after he presented “conclusive proof” of a secret project underway in Iran for the development of nuclear weapons.” Netanyahu said the site contained “some 15 kg (33 pounds) of radioactive material that has since been moved.” The Iranian nuclear initiative is funded thanks to John Kerry and the Iran Deal that transferred $150 Billions to Iran! Netanyahu accuses Europe of ‘appeasing’ Iran! The PM also sent a direct warning to Hezbollah! ‘Israel knows what you’re doing .. will not let you get away with it.’ The irony is that the ridiculous Iran Deal has united Israel, Egypt, Saudi Arabia, Jordan, and other Arab countries in a demand that Iran is NEVER allowed to have nuclear capacity! Only the European’s think its a joke….