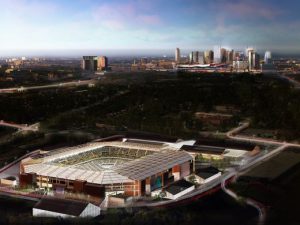 Nashville’s mayor is working hard to bring in a professional soccer team as the MLS will be expanding. After an intense public debate on November 6th over the city’s potential investment in building a new stadium, the Metro Council voted 31-6 in support of the proposal. This allows Nashville to move forward in its bid to win one of the two MLS expansion teams.  The local debate over Nashville’s proposal took many forms with opposing parties concerned over such issues as its cost to the tax payers, its impact on local neighborhoods and the Fairgrounds, as well as concern over Metro’s priorities. Urban Studies and Public Administration research has long held that the vast majority of stadium deals cost the sponsoring city money.  At the same time, large-scale project investment speaks to a city’s confidence in shaping a vision of its role in a globally competitive world.   Nashville’s decision soccer stadium is a reflection of the city’s increasing status as an internationally-competitive metro area that seeks to forge a new identity by uniting its increasingly diverse population.

The key factors supporting the stadium are: 1) soccer as a unifying cultural force, 2) the role of public-private partnerships in laying a foundation for the city’s new identity, and 3) the Fairgrounds as a symbol of the city’s past and future.

Soccer’s importance as a global sport cannot be underestimated: “The Beautiful Game” is the world’s most popular sport and can bring added value to the city. Nashville’s demographics are in constant flux as the city continues to experience significant population growth and its new residents are hungry to invest emotionally and socially in their adopted home. The intensity and joy with which Nashvillians (new and old) cheered last May and June as they watched the Predators play exemplifies their renewed civic pride in the ‘New Nashville,’ – their Nashville. Soccer has the capacity to channel that hunger across neighborhood boundaries.

Public-private partnerships are a key factor in any city’s success: time and again the most successful cities are those that facilitate working arrangements between government, business, and the academic world. The stadium investment is a perfect example of this kind of synergy and can be replicated almost anywhere where there a sufficient population base to support these ventures.

The Fairgrounds is a historical landmark and a center of pride and activity for many Nashvillians.  The flea market, car racing, wrestling, and the State Fair all serve to bring the community together.  The new stadium will retain and enhance many of these traditions: it will bring together the old and new to reflect the reality of new Nashville that respects tradition too.

Our analysis leads us to support the stadium, its accompanying development, and the continued capitalization that has spurred the city’ and the region’s transformation into a major urban center in a global economy. Our future soccer stadium is one small element in an ongoing effort to make Nashville attractive to outsiders and further enhance our city’s competitiveness in the global marketplace.