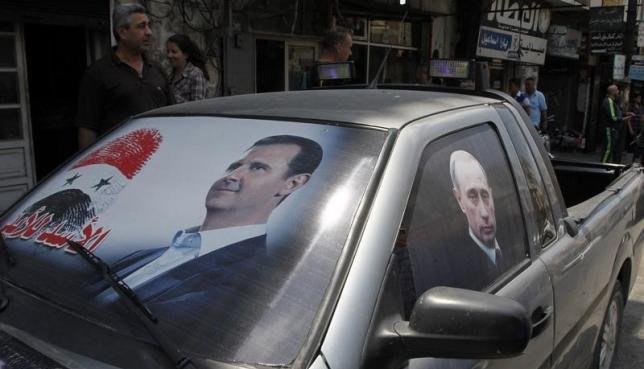 The Syrian Civil War, an ongoing armed conflict, began in the spring of 2011. Intelligence sources estimate is that out of a Syrian population of 17 million, more than 6.5 million people had been displaced and more than 4 million refugees had fled to countries such as Lebanon, Jordan, Turkey and now Eastern and Western Europe. The totals are hard to estimate but undoubtedly larger. This reality has finally got the attention of international and U.S. humanitarians, despite the fact that action to end that conflict should have begun four years ago before such a catastrophe came about. The focus on refugee suffering has been only emerged within the past week. It took a photograph of a toddler lying lifeless on a beach to catch the world’s attention, and foster a collective sense of disbelief and pain. This terrible reality is the outcome of ongoing apathy of the global north and inattentive U.S. leadership in the region. Of special concern now is Russia’s recent forays into the region.. While the world focuses now (rightly so) on a humanitarian disaster, the Russians continue to do all they can to strategically benefit from the chaos.

In recognition of this hard reality on the ground and in an effort to propose an alternative strategic approach, I wrote in a LinkedIn post (June 4) that “Syria should be divided in a manner that would unite their Sunni populations with those who live in the Iraqi west. What will be left of Syria will be divided into an Alawite (Shi’a sect) in the central western part of the country’s coast. This will be, in fact, the re-creation of the Alawite State of the 1920s and 1930s. The Alawite stronghold in the northwest is based around Latakia. This is most likely where President Assad will escape to when the defense of Damascus will collapse, which is only a matter of time“. U.S. National Security; Collapse of Iraq and Syria, ISIS Threat

Unfortunately, the U.S. has chosen to be passive and ignore this emerging reality. We missed an opportunity to be pro-active and try to stabilize the region.  Four years since the start of this conflict, we are only now waking up to find out that (as predicted) things are getting worse. The New York Times (Sept 4) is reporting (three months after my above post) that “Russia has sent a military advance team to Syria.” This is alarming – the Russian move is focused on an airfield that serves Latakia. This report is confirmed (Sep. 7) by Reuters, while rhe Telegraph (Sep. 7) states clearly that “Russia is building a military base in Syrian president Bashar al-Assad’s heartland…”

The Russians’ aggressive activity in the face of an international refugee crisis and there effort to assure the survival of of Assad has intensified. It is ironic that they are now building homes for their troops in Syria, while Syrians are seeking shelters elsewhere. Russian military support for President Bashar al Assad furthers an already ongoing relationship that also has the only Russian base outside the former Soviet Union at Tartus in Syria.

The reported build-up of Russian military, centered on Latakia, is no surprise. I suggested that this region is dominated by the Alawites and will be the refuge for Assad when Damascus falls. This Russian move certainly reminds us of their military annexation of Crimea. The current Russian move is a direct and immediate threat to NATO, U.S. national security, Saudi Arabia, Israel, Jordan, Egypt and Turkey. This development and strategic impact should be closely analyzed at a time that the U.S. Embassy in Syria tweeted, “Reports indicate that the regime is making air-strikes in support of ISIL’s.” These latest in the war theater clearly suggest that the four year U.S. “strategy” and policy that the war in Syria  will be resolved in diplomatic negotiations is obsolete at best and certainly disconnected from reality. tHis latest development raises once again the question of why the U.S. and NATO did not apply as I suggested 4 years ago a “no fly zone” in Syria. these latest developments will continue the spread of instability in the region that will add to the flow of refugees and more possible negative outcomes. In fact, its impact of the anti Assad fighters that the U.S. is training is that they are refusing to fight only against ISIS and without tight air support. the Russian move has just  added a significant element of urgency and complexity.

Continued Russian expansion should not surprise anyone; it is the weakness of Europe and the U.S. that should be of concern and the lack of any coherent strategy.  While the Russians will most likely not annex the Latakia area, their ongoing military presence in the region will allow them a significant foot on the ground in a rapidly changing Middle East. It will also assure that the hostilities and fighting in Syria.

One may ask what is next? Lebanon? There are many in the region who are profoundly concerned by this slow and stealthy Russian activity. Yet, the U.S. and the Europeans have not forcefully set a “line in the sand” for the Russians. The U.S. is once again caught by surprise and, as in the case of Crimea, the State Department led by Secretary Kerry took minimal action to warn the Russians against this significant encroachment. The Russians one the other end, pay no attention to these weak statements.

In the Middle East, we are facing persistent and dangerous instability – an international crisis of a magnitude that we have not experienced for decades – and all this shortly after the misguided celebrations of the “Arab Spring.”  The fact is that the U.S. foreign policy in the Middle East has been based misunderstanding of the region; European policy based primarily on narrow self interest and greed; Chinese policy has been based on expanding their economic interests into the region; and the Russians on imperialistic ambitions whose historical roots go back to the Tsars and on a lack of concern for human suffering. This should lead us to question our current policy trajectory and to ask is there a linkage between the intelligence we collect from a variety of sources and our policies? At times they seem mutually exclusive! Why are we constantly surprised and slow to respond?