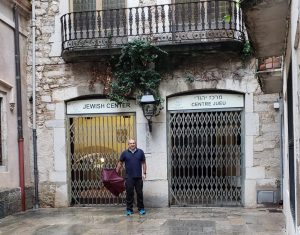 The massacre of Jews in Pittsburgh made me reflect on a recent visit to the city of Girona in Catalan, Spain – an hour from Barcelona. Jews settled the city in 982 and created a vibrant community. It was the birth place of Cabala and of the great sage and Rabbi – the Ramban, “Nachmanides” (רמב״ן‬ ). In 1492 all Jews were expelled and forced to leave! Over 500 years of a community ended in a minute notice. Those two events have something in common  – 2000 years of prejudice and hate against Jews! The rise of 57% in Antisemitism in the USA in one year and my own experience as a target, leaves me with profound questions…. I daily see hate against Jews / Israelis which led to the  murder of a 97 year old Holocaust survivor Rose Mallinger. Time to understand that Antisemitism is at the core of many! That sadly will never change! אנטישמיות בארצות הברית זה דבר אמיתי וקים  The latest attack is a horrific reminder of thousands years of Antisemitism and attack on Jews and Israel that never ends! “May God console you among the other mourners of Zion and Jerusalem.” Never Again! In picture: the Jewish Center in Girona, Catalan, Spain.