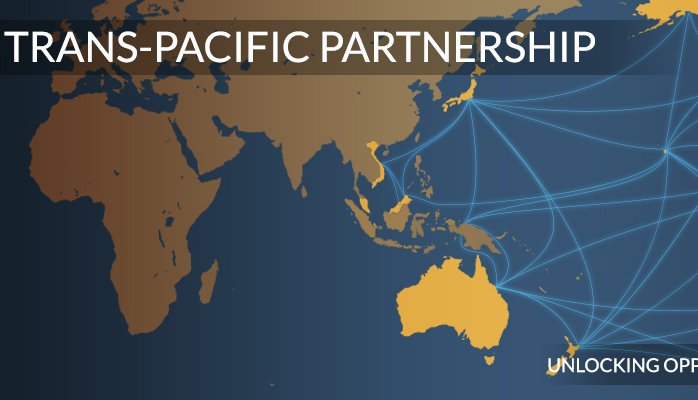 After years of negotiations, the Trans-Pacific Partnership (TPP), a massive 12-country trade pact, was announced on October 5. Given that many of the agreement’s details are classified and only accessible to members of Congress, its little wonder that few American have anything but the vaguest notion of what the TPP is or how it will affect their futures (http://www.cnn.com/2015/06/11/politics/trade-deal-secrecy-tpp/).

My turn, Since I’m not in Congress nor was one of the administration’s negotiators, I don’t know entirely what’s in the agreement either. But as an expert in public policy and an avid reader, I’ve learned a fair amount about the TPP’s history and many of its major issues. It’s that history and those issues that I want to address in this article. Despite the many years spent negotiating and drafting this agreement, I argue that it would be precipitate for Congress to approve the TPP, and that, rather than putting it on the ‘fast track,’ as the Senate did earlier this summer, we – both we citizens and our representatives – need to slow down and learn more. On Saturday (October 17, 2015) President Obama published an op-ed in several local newspapers to make his case for a swift passage of the Trans-Pacific Partnership trade agreement. http://www.cnn.com/2015/10/17/politics/barack-obama-tpp-op-ed/. The proposed TPP and the urgency of the president and several Republicans in congress to pass the agreement requires analysis and attention.

Before I begin to lay out the TPP evolution and my arguments, however, I need to make a few things clear. First, I’m a political realist and like the greatest of them all – Bismarck – I believe that politics “is the art of the possible.” In other words, I understand that major trade agreements need to have certain secret provisions, especially in high-tech, military equipment, and medical R&D where national security concerns come into play. Moreover, we need to keep the wider view in mind – the US is entering an era where emerging geo-powers such as Russia and China pose an increasing challenge to its economic dominance. Seen from this perspective, TPP, which ties the US with Australia, Brunei, Canada, Chile, Japan, Malaysia, Mexico, New Zealand, Peru, Singapore and Vietnam, can be seen as a counterweight to the Shanghai Cooperation Organization (SCO), which created an economic partnership between Russia and China and four Central Asian states in 2006 (India and Pakistan are soon to become members). Moreover, the US considers the TPP as the companion agreement to the Transatlantic Trade and Investment Partnership (TTIP), a similar arrangement between it and the European Union.

Thus, agreements like TPP and, before that, NAFTA are never just about trade. The old saying, “trade follows the flag,” still holds: TPP is, on one level, the US planting its flag all around the Pacific Basin to “to create a platform for economic integration across the Asia Pacific region.” And this agreement follows the model set up with NAFTA and earlier accords: lowering trade barriers, establishing common policies on intellectual property, labor law, environmental issues, contract enforcement and investor-state disputes. Or, in TPP-speak: it aims to “enhance trade and investment among the TPP partner countries, to promote innovation, economic growth and development, and to support the creation and retention of jobs.”

Its gestation has been quite protracted and reaches back to the George W. Bush administration. In essence, the Bush administration announced its intention in 2008 to become a partner in a trade agreement – the Trans-Pacific Strategic Economic Partnership Agreement or P4 – signed by Brunei, Chile, New Zealand and Singapore. Negotiations were formally announced later that year and, as the process continued, additional countries asked to join: Australia, Peru and Vietnam expressed their interest during the November 2008 Summit of the Asia Pacific Economic Cooperation Forum in Lima, Peru. Negotiations finally commenced under President Obama in Melbourne, Australia, in March 2010. Over two-dozen rounds of negotiations and meetings then took place between early 2010 and the conclusion of negotiations early this October. During that time, new countries like Malaysia, Canada, and Japan joined the negotiation and were invited to become members of the agreement.

As it developed, the TPP became the centerpiece of President Obama’s trade policy. As the Office of the US Trade Representative’s website confidently proclaimed, “TPP brings higher standards to nearly 40 percent of the global economy…. We expect this historic agreement to promote economic growth, support higher-paying jobs; enhance innovation, productivity and competitiveness; raise living standards; reduce poverty in our countries; and to promote transparency, good governance, and strong labor and environmental protections.” (https://ustr.gov/about-us/policy-offices/press-office/press-releases/2015/october/trans-pacific-partnership-ministers). So intent was President Obama in finalizing TPP that, in a controversial move, the Senate in June 2015 agreed to give the president a ‘fast-track’ authority to expedite the final negotiations. (http://www.theguardian.com/us-news/2015/jun/24/barack-obama-fast-track-trade-deal-tpp-senate). The voting public strongly opposes having Congress pass a fast-track authority for consideration of the Trans-Pacific Partnership trade deal. This was passed despite the fact that 62% of voters opposed the passage of fast-track negotiating authority for the TPP deal. http://fasttrackpoll.info/. So, congress gave the president the fast-track authority and in October 5, 2015 an agreement was announced.

The positive implications of TTP could be huge: the TPP countries are the largest goods and services export market of the United States. U.S. goods exports to the broader Asia-Pacific totaled $942 billion in 2012, representing 61 percent of total U.S. goods exports. U.S. private services exports totaled $226 billion in 2011 (latest data available), 38 percent of total U.S. private services exports to the world. America’s small- and medium-sized enterprises alone exported $247 billion to the Asia-Pacific in 2011 (latest data available). Reducing the trade barriers offers the possibility that these already astonishing figures could go even higher. Indeed, the belief, by some, of the economic potential resulting from liberalizing trade within the Pacific region is so big that a strange coalition has been formed. It includes the Obama Administration and congressional Republicans and they have committed to secure a speedy final approval. This alone raises the question of a viable scrutiny of the TTP agreement details.

So, why am I not joining the chorus? While trade deals are generally boons to economic growth – sometimes they are not (or not much). As Mark Weisbrot, co-director of the Center for Economic Policy and Research, avers, Mexico and Latin America did not fare particularly well in the 20 years NAFTA’s passage (http://www.huffingtonpost.com/mark-weisbrot/lessons-from-nafta-for-th_b_8315512.html). Moreover, many Americans, organizations and advocacy groups – have memories of NAFTA draining high-paying manufacturing jobs from the US and replacing them with lower wage service sector jobs in their wake. Bernie Sanders, Democratic candidate for President, characterized TPP in similar language after the negotiations concluded this October, “Wall Street and big corporations just won a big victory to advance a disastrous trade deal.” In a strange parallel with Obama’s Republican supporters, Sanders has been joined by some strange bedfellows too: not only other progressives like Massachusetts Senator Elizabeth Warren but also Hillary Clinton, who has come out against TPP despite her support for the secret negotiations while she was Secretary of State. Most surprising of all, the Republican Presidential frontrunner, Donald Trump, a billionaire businessman, has also decried TPP while on the campaign stump as “terrible.”

So, what’s going on and what’s the appropriate response to the proposed TPP? There are many solid reasons to be worried about TPP. For one thing, many Americans are much more wary of international trade deals in the wake of NAFTA than they were before; they see TPP as another threat to their already diminishing job security and the candidates are responding to those anxieties. Indeed, the Economic Policy Institute has estimated that NAFTA cost America 700,000 jobs (http://www.epi.org/publication/nafta-legacy-growing-us-trade-deficits-cost-682900-jobs/) and the Washington Post has averred that claims that TPP will add jobs are largely illusory (https://www.washingtonpost.com/blogs/fact-checker/wp/2015/01/30/the-obama-administrations-illusionary-job-gains-from-the-trans-pacific-partnership/). The lack of transparency surrounding TPP, while, in part, necessary but here taken to an extreme, and Obama’s decision to ‘fast-track’ TPP passage through Congress has also raised serious concerns. Progressive websites like the Electronic Frontier Foundation argue that many of the provisions in the TPP will erode the power of national governments and strengthen those of already powerful multinational corporations (https://www.eff.org/issues/tpp) as well as radically re-write intellectual property rules (https://www.eff.org/deeplinks/2015/10/final-leaked-tpp-text-all-we-feared). That means that laws designed to protect citizens will be re-written in favor of multinational corporations. For example, TPP will change the ‘investor-state dispute settlement’ process to allow multinationals to undermine public interest laws in the different signatory countries. (https://www.eff.org/deeplinks/2015/04/leaked-tpp-investment-chapter-reveals-serious-threat-user-safeguards)

In my view, whether the supporters or critics of TPP are right or wrong is somewhat beside the point. The real issue is that, from a policy standpoint, the Obama Administration and its international partners did not establish a clear structure and process to the development of this major trade agreement. Consequently, with so much of the TPP classified and little consequent public discussion over its ramifications, even informed observers like myself have no means to evaluate the agreement. This is bad practice and inappropriate policy. This means that anyone interested in the details and impact of the TPP must resort to private organizations like the Electronic Frontier Foundation, even to Wikileaks and maybe just believe what we told in order to learn anything substantive.

So, here’s my advice. Let’s ‘slow track’ the TPP. Congress should table any vote on the TPP until after the November 2016 elections. First of all, a vote of this consequence should not be made with electoral considerations in mind. Secondly, because the Obama Administration has deemed this to be one of their defining legacies, final approval should wait until a new administration, that is less invested politically in the treaty is sworn in. Finally, more needs to be known about what is in this agreement – not any sensitive material that might encroach on US national security, of course, but the consequences for Americans’ rights and well-being need to be better understood and actively debated. The TPP shouldn’t be voted upon during the 2016 election year but it should be one of the central topics in the election.

‘Slow tracking’ TPP will allow time to develop a helpful policy analysis and a public debate over the benefits and drawbacks of this agreement. It will enable, in other words, the democratic process to determine whether this agreement will lead to positive economic outcomes or not?