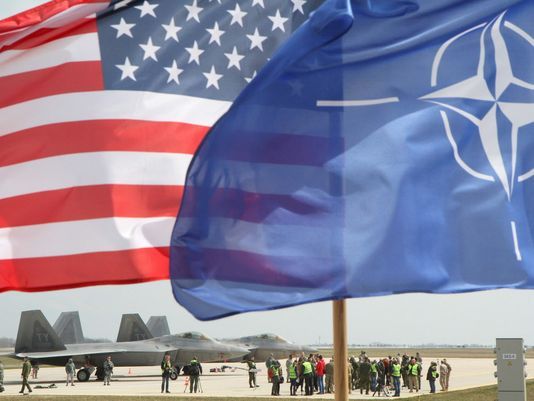 NATO is a 20th century organization adrift in a 21st century world.

One of the more unusual topics of this very unusual election year has been the hitherto uncontroversial issue of the U.S. commitment to NATO. Last month, in his characteristically blunt fashion, Republican presidential candidate Donald Trump slammed NATO for being “obsolete.” This week, as he swept closer to the GOP nomination, he softened that to “outdated” but repeated his call for changes — including making allies pay more. Democratic candidate Bernie Sanders similarly has argued that the United States should scale back its NATO commitments.

These ideas have drawn ferocious criticism from the defense and foreign policy establishments, including the Pentagon and former secretary of State Hillary Clinton. Victor Davis Hanson, a historian at the Hoover Institute, acknowledged the salience of Trump’s argument but then backflipped to argue for the organization’s continued relevance anyway: “A powerful Russia will always have to be watched. A dynamic and headstrong Germany will always have to be integrated into some sort of military alliance. And the United States will always have a natural self-interest in pre-emptively keeping kindred Europeans from killing each other.”

Yet there are good reasons to take Trump’s and Sanders’ arguments seriously. On one level, NATO really is obsolete. It was established in 1949 to ensure the collective defense of Western Europe against the threat of a Soviet invasion. At the time, this did not seem like a particularly remote possibility.

NATO succeeded in keeping Western Europe safe for more than 40 years, until the collapse of the Soviet Union in 1991. And then a curious thing happened: NATO both lost its rationale for existing and went through a dramatic expansion of member states.

As the Soviet sphere collapsed and Russia struggled with persistent economic malaise, the U.S. pushed through the admittance of Eastern European countries into the NATO alliance. By 2009, such former Eastern bloc countries as Poland, the Czech Republic and the Republic of Slovakia (the former Czechoslovakia), Romania, Bulgaria and Hungary were full-fledged NATO members. More contentiously, so were the three Baltic republics of Estonia, Latvia and Lithuania — all of which, unlike other NATO members, have common borders with Russia.

Their tensions with Russia, and their very admittance, raise the risk that NATO and the U.S. could get pulled into a broader conflict with Russia. Indeed, Russian leaders have argued that in expanding NATO, U.S. leaders broke their promise to not exploit the Soviet collapse to extend NATO into Russia’s sphere of interest. Many foreign policy writers and journalists — consistent with the official Russian line — say Western efforts to bring Ukraine into NATO led to the prolonged political crisis and partial Russian occupation of that beleaguered country.

At this point, NATO no longer has a clearly defined contemporary purpose and, if anything, it has been the source of increasing international friction. Moreover, and most important, it is incapable of dealing with the threats of the 21st century, especially terrorism. Collective defensive treaties are meant to ensure the safety of states against other states. They don’t provide an especially effective framework for confronting non-state threats such as al-Qaeda and the Islamic State, which don’t amass armies on a nation’s borders but strike at them from within using guerrilla tactics.

POLICING THE USA: A look at race, justice, media

Let’s call out NATO for what it is: a 20th century organization adrift in a 21st century world. Instead of paying the majority share of its exorbitant costs, the U.S. should shift more of the burden to its NATO partners and transition to a more flexible defensive system that responds to contemporary problems such as terrorism. NATO itself should be phased out and replaced by a series of bi- or multilateral arrangements between America and different countries.

Under NATO, defense defines the nature of U.S. relations with the other 27 member countries. A gradual phaseout would allow a greater role for diplomatic relations where appropriate. Some countries might need more military assurance than others. Estonia and Latvia, for instance, could have greater defensive needs against Russian incursion than France.

Similarly, by reducing the financial burdens imposed by NATO, America would be freer to develop and strengthen its partnerships in the Middle East, where Russian encroachments in Syria mark a new challenge for our foreign policy, and in the Pacific, where North Korea and China remain persistent concerns.

Finally, the gradual phaseout of NATO would send Russia a message that the U.S. and Western Europe were no longer attempting to encroach on its spheres of interest by incorporating more former Eastern bloc countries, while at the same time reassuring Europe of continued, but more tailored and strategic, support on defense.

Renegotiating our alliance system will better reflect U.S. economic reality and allow us to better handle an increasingly complex world. We need to be able to grapple with tomorrow’s problems unburdened by the legacies of yesteryear.

Michael Harris, dean of the College of Public Service and a public policy professor at Tennessee State University, is a consultant to the Tennessee Bureau of Investigations and a retired intelligence officer in the Israeli Defense Forces.Kenneth Garner, a specialist in 20th century European history, is a visiting assistant professor at Kalamazoo College.

This article first appeared in USA Today on April 28, 2016