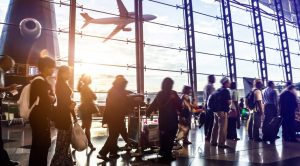 NASHVILLE, Tenn. (TSU News Service) – International students with legal status in the United States should not be worried about the new travel ban, says a public policy expert at Tennessee State University.

Dr. Michael Harris, dean of the College of Public Service and a longtime expert on Middle Eastern politics, said there is “no language in the law that will affect these students.” However, the ban could impact those wanting to enter the U.S. other than to study.

“No, students should not be concerned at all,” Harris said. “I don’t believe it (the ban) has any impact on students that are admitted to universities in the United States with an I-20.”

The Certificate of Eligibility for Non-immigrant Student Status, also known as the I-20, allows student to stay in the country for the duration of their program. The I-20 is processed in the country of origin and makes it legal for individuals to come to the United States and learn, Harris added.

On December 4, the Supreme Court allowed the ban to go into effect, although legal challenges against it remain. This means that the government can fully enforce its new restrictions on travel from eight nations, six of them predominantly Muslim. For now, most citizens of Iran, Libya, Syria, Yemen, Somalia, Chad and North Korea will be barred from entering the United States, along with some groups from Venezuela.

While the ban does not impact current international students studying here, it still causes them great concern. This includes Nahal Jafari, a freshman psychology major at Tennessee State University.

The Iranian native said she cancelled all options to attend college in her country and chose to come to the U.S. for her studies, but thinks the ban may cause her problems in the immediate future.

“I am really worried because this impacts my student visa,” said Jafari, who was planning on going home during the summer break for vacation but thinks it may not be a good idea. “If I decide to change schools or go home to see my family, will I be able to?”

TSU has about 560 international students from 35 countries, with a good number from Iran, Iraq and Somalia, which are on the travel ban.

In most cases, citizens of these designated countries will be unable to immigrate to the United States permanently, and many will be barred from working, studying or vacationing here. For instance, Iran will still be able to send its citizens on student exchanges, though such visitors will be subject to enhanced screening.

Mark Brinkley is the director of international education in the Office of International Affairs (OIA) at TSU. Brinkley recommends all international students submit their current I-20 for review prior to departing the U.S.

He said if the I-20 is current, “students may re-enter the country without challenges from the U.S. Citizenship and Immigration Services.”

International students in middle Tennessee should go to their designated school official (DSO) to ensure they have all proper documentation and fully understand the new travel ban.