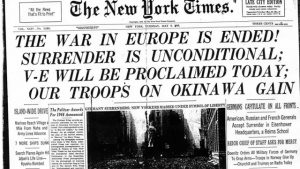 V-Day and today! May 8 – we celebrate and honor V – Day. 73 years ago on this day in 1945, Great Britain and the United States celebrate Victory in Europe over Nazi Germany. It was an end of the most terrible war experience in human history. It assured the survival of the world from being taken over by a Nazi regime. On this day German troops throughout Europe surrendered. Across Europe and the U.S. people put out flags and banners, celebrating the defeat of Nazi Germany and the end of the terrible war. We still live with the scars and consequences of that terrible war. Seventy three years since  V Day – as Europe and the U.S are discussing the future of the “Iran Deal” – we should never forget the efforts to appease Germany before WWII. It only resulted in a horrific war!  May this be a clear reminder for the U.S and Europe as the dilemma about Iran is looming and debated. I know all too well that war is hell but surrendering in the face of a threat is an unacceptable deal. As Winston Churchill famously said: “Every man should ask himself each day whether he is not too readily accepting negative solutions.”

« The U.S. Automakers Have Failed to have American Consumers Believe in the Sedan Product that they Manufacture!
“Israel strikes ‘nearly all’ Iranian infrastructure in Syria!” »