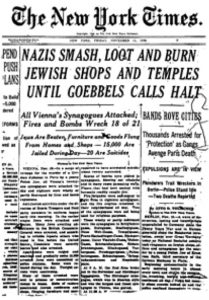 It was on November 9 at night in 1938! We remember Kristallnacht! Crystal Night! A night in Nazi  Germany in which over 1,000 synagogues were burned and over 7,000 Jewish businesses were destroyed or damaged. And… the USA was silent!

If that was not a sign to intervene and save 6.5 millions of Jews that were soon to be led to death, including 1.5 million children… what could be?

This was only the beginning of the horror that was to follow! But we say and are resolved – NEVER AGAIN! No Where!

« Balfour Deceleration – Centennial Celebration; The Reconstituted Of the National Home of the Jewish people. November 2 1917
Why Xi Jinping Should Be Named TIME “Person of the Year”, Michael Harris PhD, Dean and Professor, CPS, TSU, Nashville TN »