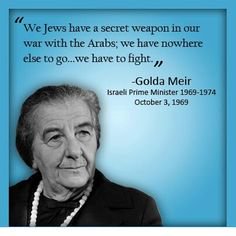 At the Democratic National Convention in Philadelphia, millions of Americans watched as Hillary Rodham Clinton became the first woman in American history to be nominated as a major party presidential candidate. She acknowledged this milestone by stating, “Because when any barrier falls in America, it clears the way for everyone… after all, when there are no ceilings, the sky’s the limit.” The United States has a very real possibility of joining the sixty-three (of 142) nations that have had a female head of government or state at some point in the past fifty years [http://www.pewresearch.org/fact-tank/2015/07/30/about-one-in-ten-of-todays-world-leaders-are-women/]. So what can Clinton learn from her female predecessors around the world? One of them, I believe, in particular shares many common characteristics with Clinton. That leader is former Israeli Prime Minister, Golda Meir. Her background and experiences lend themselves as a set of lessons for a woman seeking to be a nation’s leader, particularly, in a time of instability in the national security arena.

Golda Meir (1898-1978) was elected as Prime Minister of Israel in 1969 which – it cannot be overemphasize – was 47 years ago! While forty-seven years separates the tenure of (possibly) both women, an analysis reveals they both have surprisingly much in common: both were raised in the USA; both were members of their respective legislatures; both served their country as Secretary of State and both were indefatigable fund-raisers. This was different as Golda never had her own foundation to raise money for. At the time Meir served as foreign minister she was the only female in the world in that capacity. Both were at a similar age when they (again, possibly in Clinton’s case) rose to the top executive office, and both were known for their toughness. Meir led at a time of increasing national security challenges including the War of Attrition, the Munich massacre in September 1972 and the Yom Kippur War of 1973. Clinton will face a presidency wrought with similar challenges including the continued presence of ISIS, the growing belligerence of Russia, and the worldwide spread of global terrorism. Meir’s successes and failures can offer Clinton a framework for analysis for the uncertain times in which we live.

Meir’s biggest failure was her inability to develop a strategic approach to Israel’s security, racial, and economic challenges. In many ways her term in office has been characterized as one avoidable tactical miscalculation after another.in order to be successful, she would have needed to reject the status quo and be a more-forward looking visionary leader. For example, Israeli intelligence services had collected a vast amount of data that suggested an imminent attack on Israel and which resulted in the Yom Kippur War. Meir chose to ignore the signals and consequently found herself, and her country, unprepared for a conflict that for a time posed an existential threat to Israel and threatened a wider global confrontation between the super powers. Had she taken greater initiative and adopted a more comprehensive strategy, she would have been in a better position either to negotiate a peace settlement or, alternatively, to order pre-emptive strikes that might have forestalled the wider conflict. Thus, despite her good relations with the IDF (Israeli Defense Force, aka Israel’s Army) staff, she chose to ignore their advice and led Israel almost to the brink of extinction.

Meir never presents a long-term strategic vision or strategy to address security, economic or racial tensions in the country and during her tenure friction among the population increased.

What might be the lessons for Hillary Clinton if elected president from the tenure of Prime Minister Meir? Surprisingly the analysis reveals that it is not the “female factor” that matters that much while serving as top of the executive branch of government but rather one’s ability to be forward-looking and strategic while challenging the status quo. Both women’s career evolved in several public organizations and roles which time and again rewarded maintaining the status quo. By the time Golda became Prime Minister she maintained the status quo during her tenure and her and Israel paid the price for that. Hillary’s challenge if elected is to recognize ahead of time that the status quo is yesterday. If elected she, the nation and the world will benefit from a visionary strategic mind-set. This approach must prevail in order to achieve success. In the case of Golda it did not. Hillary has an opportunity to learn and prepare for a visionary tenure that will address the fundamental challenges that the USA faces. It is not about being elected as a female president but rather about the difference her tenure will have if elected.

This article first appeared in the Kokomo Perspective September 19, 2016

What Hillary Can Learn from Golda, Linkedin