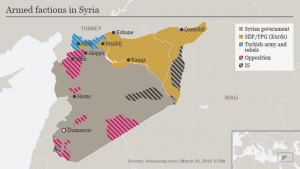 An American soldier  Master Sgt. Johnathan J. Dunbar, 36, of Austin, Texas, was killed by an IED in Manbij, Syria! A very important question is who is responsible for his death and the death of a British soldier, Sgt Matt Tonroe who was embedded with US forces?

The complication on the ground makes answering this question decisively a challenge.  Manbij is a the town in Northern Syria that was under Isis control until 2016 and has recently been the subject of tensions between NATO and the US against Turkey. It is close to the border with Turkey and  the US-backed Syrian Democratic Forces (SDF) have been fighting troops from Turkey to control the region as Turkey continues to violate international law and invaded the region. The SDF includes Syrian Arab and Kurdish forces backed by US troops on the ground. The region, after capturing the region from ISIS with US-led coalition heavy support in August 2016 it became an autonomous Democratic Federation of Northern Syria, or Rojava, across the west bank of the Euphrates River.

The Turkish military has aggressively done all it could to end the autonomy and push the US out of the region. The Turkish regime was concerned that the Manbij autonomous pocket will unite with the Kurdish autonomous region in Afrin to the west. Turkey’s goal is clear – to do all it possibly can to assure that the Kurd’s in Syria mainly the PYD will have no areas of autonomy.  The US maintained special forces to support the SDF and the Kurd’s in the region. Mainly the presence of special forces in Manbij to assure that ISIS does not return.

So, who is responsible for the IED that killed the US and British soldiers? The Turkish military? others? We are not sure but one thing is for sure – the source of the tension in this remote Northern area of Syria on the border of Turkey is a result of a failure of the Trump administration and Secretary of Defence Jim Mattis to articulate a clear visions and strategy as to what the goal of the US is in Syria is? What are the 2,000 American troops in Syria that the Trump administration has mobilized supposed to do? Protect against Turkey, assure ISIS does not return? Push the Russians out of Syria/ Assure the Hezbollah and Iran do not control the country? Unclear at best! This adds to instability and and casualties without a clear goal.

The tragedy is that two brave soldiers / Heroes were killed by an IED in Northern Syria while NO ONE has a clue as to what the overall strategy is?

Isn’t it time this administration made a clear statement about Syria and its future?