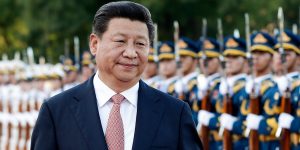 Although we will not know who Time magazine has chosen for their Person of the Year, for me there is no contest. Although outsize figures like Donald Trump, Vladimir Putin, and Kim Jong Un would seem to be the most obvious choices, in truth the honor goes to a figure who has deliberately remained comparatively quiet during this tumultuous year: Xi Jinping, President of the People’s Republic of China and General Secretary of the Chinese Communist Party (CCP).

At first, this may seem like an unusual choice. The ongoing crisis in North Korea, for example, has made it appear that Xi is unable to control the reckless actions of his ally (or client, as you prefer). Secondly, economists have been increasingly worried that China’s extraordinary economic growth (which has averaged about 6.5% so far this year) is becoming over-dependent on growing debt accumulated by Chinese companies.

Nonetheless, Xi Jinping deserves to be Person of the Year. For the first time since Mao Zedong, he has managed to consolidate almost all power into his hands. At the 19th Party Congress, held in October, the CCP reaffirmed Xi’s leadership for another five years but also, amazingly, did not announce a successor to replace him at the end of his second and, putatively last, term. Under Xi’s leadership, China has also begun quietly to assert a leadership role in the debates over climate change, moving into the void left by the U.S. when it backed out of the Paris accords.  China is committing over $360 billion in the development of renewable energy in its own domestic economy (while still, admittedly, remaining tied to fossil fuels for the immediate future).[1]

Moreover, Xi has been making astute moves to secure much needed resources for his economy through trade agreements with African nations. Back in 2013, Xi introduced his “One Belt, One Road Initiative” which sought to foster economic development and cooperation between China and many Asian and Eurasian states. This year, Xi expanded this initiative into Africa to help strengthen its already strong foothold on that continent. Under Xi, China has invested massive sums in African infrastructure including deep-water ports in Cameroon, Senegal, Ghana, and other West African nations and has pledged $60 billion in additional support.[2]

And, then, there is Xi’s foreign policy. Following his success at the 19th Party Congress – in which he gave a three hour speech touting China’s economic resurgence – Xi has become less confrontational with the United States and with China’s immediate neighbors over such lingering problems as China’s control of the South China Sea and Taiwan. Indeed, a more secure Xi is reaching out to establish better relations with Japan, Vietnam, and South Korea, three countries with historic enmities against China. Xi has already visited Vietnam and talks are underway to invite South Korean Moon Jae-in to Beijing sometime in 2018.[3]

These different moves – over climate change, economic development, and foreign relations – and Xi’s more moderated (and more characteristic) low-key approach indicates that China is skillfully and quietly pursuing its goal of re-asserting itself as the dominant nation on the world stage. Although less “flashy” than some of the West’s current leadership, Xi had a particularly successful year in strengthening his objectives and expanding his One Belt, One Road Initiative. In the meantime, the U.S., the U.K., especially, find themselves unable to carry through any significant policy measures.

This is why I see Xi Jinping as the Person of the Year. By consolidating his authority, his continued – and possibly indefinite – presence as China’s President ensures that China will move full steam ahead with its ambitious plans for global realignment in China’s favor. Even more, Xi now has the security to pursue his nationalist agenda with the Party’s blessing and to further profit from the erratic and inconsistent leadership emanating from the West. Xi himself acknowledged in his speech at the Party Congress that this is China’s moment. Speaking in the Great Hall of the People in Beijing, Xi told delegates that China is now “tall and firm in the east”. He made it clear that it was time for China to become “a mighty force” that could lead the world on political, economic, military and environmental issues. “The Chinese nation … has stood up, grown rich, and become strong – and it now embraces the brilliant prospects of rejuvenation … It will be an era that sees China moving closer to center stage and making greater contributions to mankind.”

Xi may not have made the most news in 2017, but in his ongoing and successful efforts to position China as the world’s leading power, he is – by far – my choice for Person of the Year.